Assembling the chief songwriters of Bayside, I am the Avalanche, Hawthorne Heights, and Valencia, and tossing in Kevin Devine,  Long Island’s Crazy Donkey hosted an evening of acoustic performances by five talented musicians. Each artist approached their set in a completely different manner, making for an unpredictable and exciting evening.

The night’s first performance was by Valencia frontman Shane Henderson, though I unfortunately managed to catch just two songs. Henderson’s penultimate song was “Away We Go”, a song recorded by Valencia for their debut album, This Could Be a Possibility, but originally appearing on Promise of Redemption’s Lights That Flicker Will Surely Fade — Henderson’s debut solo album. “From the Second I Wake Up…”, a song from Promise of Redemption’s second album, closed the set.

JT Woodruff performed next, playing a seven-song set that included six originals and one Face to Face cover, chosen for its significance in introducing the Hawthorne Heights songwriter to punk rock. Wisely opting not to perform any of his band’s songs (even denying a request for the awful “Ohio is for Lovers”), Woodruff’s performance was somewhat enjoyable yet clearly the weakest link in an otherwise outstanding night. The set began with a song about his hometown, followed by a quick number about his daughter Avery. The set’s highlight was clearly “Friends in the Sky”, a heartfelt tribute to lost friends including former bandmate Casey Calvert, Bayside’s John “Beatz” Holohan, and recently deceased Avenged Sevenfold drummer “The Rev”. Woodruff closed his set on a less-heavy note, however, with “Least Favorite Things 2009”, a jab at the current neon culture and even Lady Gaga. The set: 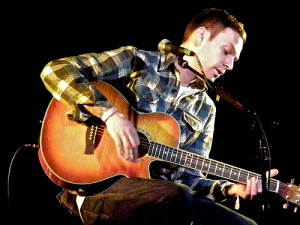 Vinnie Caruana began his set with a solid new song, moving quickly into staple “Hey” from The Movielife’s Forty Hour Train Back to Penn. “Drinking Song” and “Green Eyes”, from Caruana’s current project, I am the Avalanche, sounded great. A few more favorites from The Movielife and some rants about New York sports–specifically regarding the success of the New York Jets and the disappointments of the New York Mets–preceded “Brooklyn Dodgers”, a new I Am the Avalanche song dedicated to his mother and father in attendance. The extremely personal “I Took a Beating” closed out a solid set from the Long Island native. The full set: 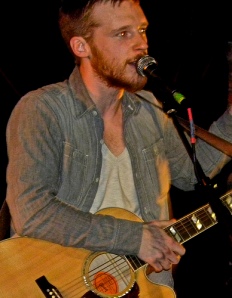 Brooklyn boy Kevin Devine played fourth, beginning with “Brother’s Blood” from his 2009 album of the same name. Despite being stripped down to its acoustic roots, the song benefited greatly from Devine’s unfeigned and fiery delivery. “Noose Dressed Like a Necklace”, from 2003’s Make the Clocks Move, was a welcomed addition to the setlist; “Keep Ringing Your Bell” was as personal and sincere as any song all evening. Unafraid to show his political and religious convictions, “Another Bag of Bones” injected biting cynicism into the set. A promising, brand new song preceded “Cotton Crush”; “Ballgame” found Devine once again tackling politics, this time in context to his own life decisions. The final song of Devine’s excellent nine-song selection was “Yr Damned Ol’ Dad”, performed significantly slower and softer than normal. The full list:

Headliner Anthony Raneri began his thirteen-song setlist with a solid cover of Matt Skiba’s “Good Fucking Bye”, receiving a fairly warm response. The crowd really cheered, however, as Raneri started to play the opening notes of the extremely emotional “Don’t Call Me Peanut”. A strong cover of Bad Religion’s “Sorrow” preceded “Landing Feet First”, a song Raneri called the “first and last love song” he has ever written. 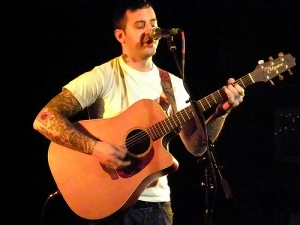 After briefly explaining that using a capo on his guitar was new territory for the experienced frontman, Raneri performed “The Ghost of St. Valentine” from Bayside’s Shudder and Tim McGraw’s “Just to See You Smile”. Talking over the intro riff of “Duality”, Raneri commented that this song finally allowed him to have his “rockstar moment” — that is, a song with an introduction that can be extended indefinitely while the band addresses the crowd over the riff.

A sloppy Counting Crows cover followed, but Raneri rebounded with a compelling performance of “The Ballad of Bill the Saint”, a song destined one day for an Anthony Raneri solo album. Acknowledging that he has too much respect for the instrument to call himself a “true guitarist”, Raneri condeded that he probably butchers “I’ll Follow You into the Dark” but loves the song and plays it anyway. Oft covered by Bayside, Smoking Popes’s “Megan” finished the set. The full list:

﻿With each artist taking a unique approach to his set (originals, covers, and parodies), the night moved along at a rapid pace; downtime between artists was brief — it was, after all, just a microphone and a guitar that needed setup. With the longest set time and biggest fanbase in attendance, Anthony Raneri clearly stole the show. Still, Kevin Devine’s performance was the most seasoned, making it clear that as a solo artist he is by far the most talented of the batch.

This entry was posted on Thursday, January 21st, 2010 at 12:00 pm and is filed under Anthony Raneri, Bayside, Crazy Donkey, Farmingdale, I Am the Avalanche, JT Woodruff, Kevin Devine, New York, Shane Henderson, The Movielife, Valencia, Vinny Caruana. You can follow any responses to this entry through the RSS 2.0 feed. You can leave a response, or trackback from your own site.