Featuring the principle songwriters of Thrice, Saves the Day, The Get Up Kids, and Bayside, the “Where’s the Band?” tour arrived in Brooklyn at the Music Hall of Williamsburg two weeks before Christmas, the first of two New York City dates featuring the four prolific songwriters. The tour’s premise was simple but quite attractive with Dustin Kensrue, Chris Conley, Matt Pryor, and Anthony Raneri performing acoustic sets of their own material as well as some covers and some holiday-themed favorites.

Anthony Raneri performed first, beginning the evening with a cover of Matt Skiba’s “Good Fucking Bye”, one of his staples when performing solo. Raneri showcased his own songwriting talents, as well, with normally-electric Bayside songs like “Landing Feet First” and “Blame it on Bad Luck” sounding great stripped down. Save the Day’s “You Vandal” was a pleasant surprise; “Meghan”, often covered by Raneri with his full band, concluded the enjoyable seven-song set. 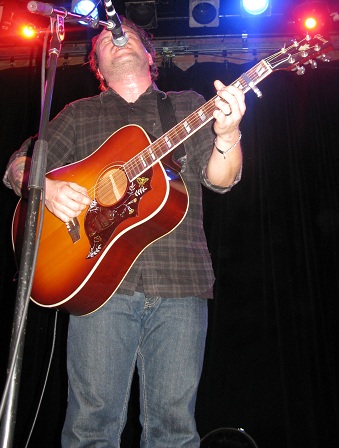 Matt Pryor performed a varied set, drawing from his own solo record, The Get Up Kids, The New Amsterdams, and other songwriters on the tour. Pryor sounded best when taking on the songs he wrote for Confidence Man or with his aforementioned bands; “The Ghost of St. Valentine” was awkward and unemotional, in complete contrast to Bayside’s original. He did better with Saves the Day’s “Freakish” — mixed with parts of “Lorelei” and Cee-Lo Green’s “Fuck You” — but “A Totally New Year” and “Hannah Hold On” were clearly some of Pryor’s better offerings.

Chris Conley joined Pryor to perform the festive “Rudolf the Red Nosed Reindeer”, the duo delivering a fun singalong in the spirit of the coming holiday. Conley’s solo set was almost entirely acoustic versions of Saves the Day songs, with only a cover of “Confidence Man” breaking things up near the end. The New Jersey native sounded fantastic, selecting a great hour-long setlist in the process. Conley’s Saves the Day songs were noticeably more intricate than those performed by Raneri and Pryor, with catchy finger-picked riffs adding constant variety to the set. Highlights included “Jessie and My Whetstone”, “Sell My Old Clothes, I’m Off to Heaven”, and “This is Not an Exit”. Unexpectedly, Conley concluded his time on stage with “Jodie” — the last song on Save the Day’s first record released in 1998 — pleasing longtime fans who were likely experiencing the song live for the first time.

Unlike the previous three performers, Dustin Kensrue stuck primarily to his own solo output for the duration of his set. The beautiful “Pistol” and haunting “Consider the Ravens” from Please Come Home began the the Thrice frontman’s hour-song set. Kensrue covered one of Saves the Day’s oldest songs (“Three Miles Down”) before jumping into a stripped down version of one of Thrice’s newest (“In Exhile”).

Kensrue reflected on the Christian side of Christmas with “Go Tell it On the Mountain”, performing the traditional song with hints of Tom Waits’s own adaptation tossed in. Kensrue was undoubtedly at his best on songs from his 2007 debut — such as the fast-paced “I Knew You Before” and “Blood and  Wine” — but acoustic takes on tracks from Thrice’s The Artist in the Ambulance were also impressive. Kensrue touched on Waits again with the beautiful “Down There by the Train”, finally wrapping things up with help from Pryor on a Ryan Adams cover.

All four singer-songwriters joined together “to play some punk rock songs” (and one Christmas classic) to close the evening. Punk in Drublic‘s “Linoleum” went first, with the quartet of men in their thirties smiling ear-to-ear while singing lines like “I’ve got a bed, and a guitar, and a dog named Bob who pisses on my floor”. Jawbreaker’s “Boxcar” was chilling and graceful, thanks to both Blake Schwarzenbach’s lyrical prowess and the collective attitudes of Kensrue, Pryor, Conley, and Raneri. Phil Spector’s often-covered “Christmas (Baby Please Come Home)” concluded the evening, sending the sold out crowd into the winter cold smiling and warm from the enchanting evening; the lucky ones would be returning to New York City on Sunday for the tour’s second night.

This entry was posted on Saturday, December 11th, 2010 at 12:00 pm and is filed under Anthony Raneri, Chris Conley, Dustin Kensrue, Matt Pryor, Music Hall of Williamsburg, New York, New York City. You can follow any responses to this entry through the RSS 2.0 feed. You can leave a response, or trackback from your own site.