With Cartel’s “Luckie Street” bouncing off the Giants Stadium parking deck walls, I walked with anticipation to the first day of The Bamboozle, returning to East Rutherford just hours after Hoodwink had ended. Arriving slightly late to the festival, I unfortunately missed The Cab (who surprised me with an impressive Queen cover-set last night) and The Ataris.

I did catch the tail end of Cartel‘s set, which included “Say Anything (Else)” into “Honestly”. Along with “Luckie Street”, these are three of Cartel’s bests songs, epitomizing the band’s penchant for punk-pop influenced pop-rock. Vocalist Will Pugh sounded great, and the guitars were bright and crisp. Although their  sophomore full-length–a self-titled Dr. Pepper sponsored debacle–would indicate otherwise, Cartel can write tremendous hooks with songs begging to be played on a summer day. It was great to hear a nice selection of Chroma cuts during the brief time I caught the band. 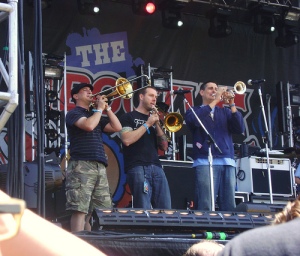 The reunion performance of Edna’s Goldfish was next. The Long Island ska band hardly missed a beat, even if frontman Brian Diz was noticeably short of breath through most of the set; he joked that the entire band was out of shape from their decade-long hiatus. In a weekend that would be overrun with techno beats, auto-tune, and neon boy bands, Edna’s Goldfish was a nice glimpse into the pre-MySpace past. Songs including “I’m Your Destiny”, “Story”, “Avoiding the Swerve”, “This is Not Here”, “Invincible”, and “Veronica Sawyer” made up an excellent set.

Opening with “Masterpiece”, Bayside sounded great. Sticking to mostly singles (such as The Walking Wounded‘s title track, the newer “Boy”, and the obligatory closer “Devotion and Desire”), Bayside played a predictable but enjoyable set. The band’s sound is clearly built for intimate clubs, but they always manage to sound great outdoors–a good thing, since the band tends to play summer festivals every year.

I wandered over to catch a bit of Bloodhound Gang who played essentials like “Fire Water Burn” and “The Bad Touch”. The Pennsylvania natives traded dares and Jackass-inspired acts (such as drinking vomit) throughout the set. Unfortunately, the mix was poor, and it was hard to make out anything being said throughout the set. I caught a bit of These Green Eyes; the band doesn’t do anything new or groundbreaking, but they were enjoyable enough to listen to while waiting in line for the restrooms.

I met up with my friends in Latin for Truth, a punk-pop/punk-hardcore hybrid band from Alabama. The band wasn’t billed for the weekend–they ventured all the way up to New Jersey just to promote their new record, a DIY tactic right out of the Lifetime playbook (a band who’s sound they attempt to channel on their debut, Eleven Eleven). The band actually suffered a bit of bad luck recently and totaled their van and all their gear; I’d encourage you help them out or at least check out their record if you’re into bands like Set Your Goals or Kid Dynamite.

Gavin Rossdale performed on the mainstage around 2PM. I walked over to find him covering a few cuts from his old bands Bush and Institute, in addition to his new solo material. The crowd clearly went for the Bush cuts; the full set:

Boys Like Girls took the opposite mainstage, amassing the biggest crowd thus far into the weekend. The band sounded spot-on, but their songs lack any punch; they are not a gripping live act and ultimately remained forgettable. Worse, the band stuck strictly to cuts from their lone album, a 2006 self-titled debut. Four years as a band, I expected to hear something new: the band’s excuse for their meager four song acoustic offering the night before was that they were too busy in the studio to learn any full-band cover songs. The band’s six-song Bamboozle set:

Stripping down from their International Superheroes of Hardcore outfits, New Found Glory topped Boys Like Girls’s crowd size, drawing most of the Bamboozle attendees for their 3PM set. At one point the band stopped to “Tweet”; interestingly, this was about the same time I was updating my own Bamboozle Twitter account. The band sounded great, playing obligatory singles (“Hit or Miss”, “All Downhill from Here”) and new songs from Not Without a Fight (“Don’t Let Her Pull You Down”, “Listen To My Friends”) before closing with the crowd-arousing fan-favorite from Sticks and Stones, “My Friends Over You”.

Hit Or Miss
Understatement
Listen To My Friends
All Downhill From Here
Failure’s Not Flattering
Don’t Let Her Pull You Down
Sincerely, Me
Forget My Name
Kiss Me
Intro
My Friends Over You

New Found Glory tourmates Set Your Goals played on a sidestage across the lot. The thirty-minute Bamboozle set appeared to be my last chance to see a bulk of their excellent debut Mutiny, and I couldn’t miss this set. I’ve seen the California punk-pop band a few times, but never as themselves for a full set (caught them once performing The Movielife songs, once performing Dave Grohl songs, and once in part opening for Paramore).  The band played well, tossing in “Goonies Never Say Die!” and a new song into the Mutiny-dominated setlist. Still, I was expecting the something more from the band. I’ll have to reserve judgement until I see them headline, because their Bamboozle set just didn’t click like I expected it to.

The Get Up Kids returned to New Jersey with a triumphant nine-song setlist celebrating the band’s entire career, digging back to 1996 with “Woodson”. The first crowd of the weekend not packed with girls still fighting to reach puberty (and a spot on the front rail), it was a nice change of pace to stand and enjoy the Kansas City Kids with a respectful audience. Vocalist Matt Pryor sounded tight, and the entire band clicked in a way that few of the weekend’s acts would match. In a catalog filled with incredible songs, the band managed to pick nice set of songs, although “Out of Reach”, “Overdue”, and “Campfire Kansas” seemed to be glaring omissions. The full set:

The Get Up Kids

I passed All Time Low and caught a bit of Parkway Drive. Night began to fall, so I decided to shop for some discount merchandise, always a highlight of the Bamboozle experience. The Eyeball Records tent had boxes of great shirts for just five dollars; I grabbed a rare Thursday (Bearfort) shirt and some New London Fire tees (what happened to that band?). I looked for United Nations merch with no luck.

At some point Journey joined the festival as a secret guest; I learned of this midway through their brief set, catching the mega-hit “Don’t Stop Believing”. With nothing else going on I walked to Razia’s Shadow as performed by Forgive Durden. I’m admittedly unfamiliar with the album, but the concept intrigued me. I sat down and caught the show, enjoying myself for the next hour as ringleader Thomas Dutton paraded guests onto the stage:

Dutton is working around the clock to promote his musical; community centers and schools can even perform Razia’s Shadow royalty-free by signing up here.

The final band Saturday was Fall Out Boy, who took the stage at 10PM with an elaborate setup. I stuck around for a few songs, but ultimately decided that Fall Out Boy is not a band with an extensive catalog of good songs. They have a few shining moments spread thin throughout their discography (“Dance, Dance” is likely the best song they’ve penned, and most of Infinity on High is fairly strong), but to stand through a twenty-song setlist seems somewhat unbearable. That’s not to say the band didn’t play well and sound tight; it’s clear they are a top-notch pop-rock act. The full set (with two covers):

Disloyal Order Of Water Buffaloes
Thriller
A Little Less Sixteen Candles, A Little More Touch Me
Sugar, We’re Goin Down
I Don’t Care
I Slept With Someone In Fall Out Boy And All I Got Was This Stupid Song Written About Me
This Ain’t A Scene, It’s An Arms Race
Headfirst Slide Into Coopestown On A Bad Bet
What A Catch, Donnie
Coffee’s For Closers
Grand Theft Autumn / Where Is Your Boy
She’s My Winona
Beat It (Michael Jackson cover)
America’s Suiteharts
Thnks Fr Th Mmrs
Tiffany Blews
Hey Ya (Outkast cover)
Dance, Dance
Saturday

Concluding the first day of Bamboozle, it was quite apparent than most of the bands performing were completely throwaway (a list that includes a barrage of auto-tuned atrocities and fad-act failures such as Cash Cash, Forever the Sickest Kids, Metro Station, We the Kings, Cobra Starship, Attack Attack, The Friday Night Boys, NeverShoutNever!, Shwayze, Asher Roth, and Sonny). Still, the festival managed to stay strong with two excellent reunion performances (Edna’s Goldfish and The Get Up Kids) and quality sets from some veterans (Bayside and New Found Glory).

More veterans, and some up-and-coming acts, would play on Sunday. That review is coming up next.