Wrapping up an extremely busy year, Thursday grabbed some of their closest friends and scheduled December 30 for their near-annual holiday event. Since releasing Common Existence in February, the band has toured nonstop in support of that Epitaph Records debut, both in America and internationally. Returning home to Starland Ballroom for their first performance in Sayreville in two years, Thursday showed signs of fatigue but clearly remained on top of their game. In a room filled with some of the best live acts in underground rock–including the triumphant return of the much-lauded Glassjaw–Thursday still stood above their peers and showcased why they are considered a top-notch live band.

Nathan Gray’s The Casting Out kicked the evening off with an explosive blend of melodic-hardcore and punk rock, running around the stage and doing their best to excite the sold-out club. Understanding that the crowd was crowd was mostly unaware of the band’s existence, Gray spent most of the set just enjoying the time on stage. The band stuck primarily to Go Crazy! Throw Fireworks! , their debut album issued on Failsafe Records, but also introduced a brand new unreleased cut as well. A strong live performance convinced me to pick up their lone full-length, and I’ll certainly be catching the Delaware natives live again soon. 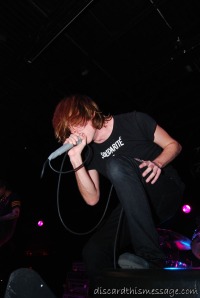 On stage for the first of two performances of the evening, vocalist Geoff Rickly introduced United Nations. A side-project for the Thursday frontman, United Nations is the vehicle for Rickly to explore his inner hardcore-kid. Anchored by the extremely talented and mathematical drummer Ben Koller of Converge, United Nations tore through eight songs in less than half an hour. Beginning with a solid performance of “Revolutions in Graphic Design”, the band opened the first pits of the evening and didn’t look back;  breakneck riffs by guitarist Lukas Previn frequently lead Rickly into a vocal frenzy on songs like “Resolution #9”. 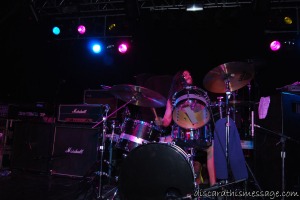 Debuting a handful of new songs (at least one of which is confirmed for an upcoming 7″), United Nations played just their fourth show together as a band despite being a work in progress for nearly half the decade. With such little time spent together in practice space, it’s remarkable how tight United Nations executes on stage. Though at the venue, contributing guitarist Daryl Palumbo did not perform with United Nations. Joked Rickly when asked about Daryl’s absence, “he’s getting his hair did.” Before closing with “No Sympathy for a Sinking Ship”, Rickly announced that the band will be performing once again on January 15 at New York City’s Cake Shop; tickets are $15 including service fees. Including three brand new songs, the United Nations setlist follows: 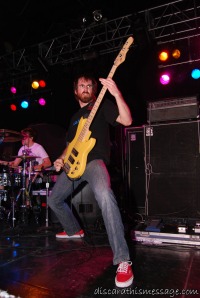 Beginning with the brand new “Good Neighbor” (from the upcoming Option Paralysis), The Dillinger Escape Plan ripped apart Starland Ballroom for about forty-five minutes. Drawing across their three full-lengths, New Jersey five-piece brazenly changed time signatures, tempos, and keys with ease, though fans in the pit area likely missed out on the subtleties while dodging kicks–and flying band members, including guitarists Ben Weinman and Jeff Tuttle who launched into the crowd in unison midway through the set. 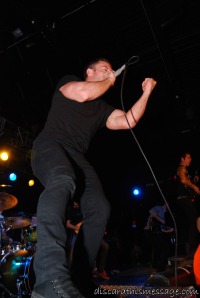 Held together by newcomer drummer Billy Rhymer (who replaces the extremley talented Chris Pennie) and bassist Liam Wilson, The Dillinger Escape performed excellent versions of technical beasts from Ire Works including “Fix Your Face” and “Mouths of Ghosts”. Irony is a Dead Scene EP”s “When Good Dogs Do Bad Things” also made the setlist which apparently was supposed to end with another brand new cut from Option Paralysis, “Farewell, Mona Lisa”. 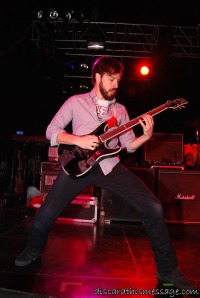 Things turned strange when the house killed the PA just as The Dillinger Escape Plan kicked into fan-favorite “43% Burnt”. As Starland Ballroom turned on the lights and brought down the set-change curtain, the band continued to roll through the near five-minute song. Undeterred by the venue’s efforts to end the band’s set, frontman Greg Puciato  pushed the curtain aside and encouraged more crowd-surfing and some of the night’s largest pits. When all was said and done, the band hurried offstage and to the dressing room. The band’s full set: 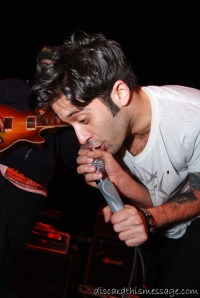 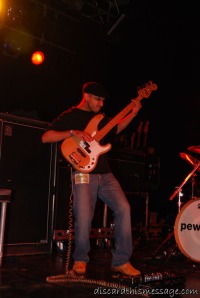 It’s hard to imagine such complex music pulled off in a live environment with just one guitar and one bass, but guitarist Justin Beck and bassist Manny Carrero make it look easy. Locked in rhythm with drummer Durijah Lang, Carrero effortlessly contributes bass leads to Beck’s own guitar leads. “Pretty Lush” and “Siberian Kiss”, from the band’s 2000 debut, Everything You Ever Wanted to Know About Silence, received the warmest responses of the twelve-song set. With nearly an hour to work with, Glassjaw’s twelve-song setlist was extemely solid and rewarding. The full list: 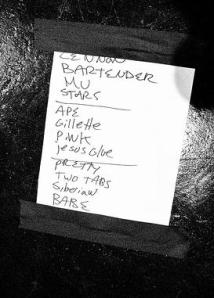 “Write these words back down,” screamed nearly two thousand fans as Thursday kicked off their setlist with Full Collapse‘s “Autobiography of a Nation” — an appropriate start to the evening, as it foreshadowed both emphasis on their 2001 album and also on crowd participation: exhausted from a year filled with touring and a set with United Nations just hours earlier, Rickly offered the crowd more parts to sing than normal. 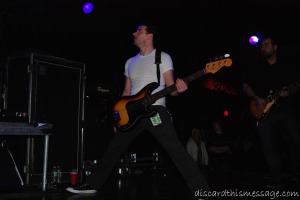 Lead by Tim Payne’s driving bass line, staple “Otherside of the Crash/Over and Out (of Control)” was next. A pair of Full Collapse favorites followed, including “Understanding in a Car Crash”, which may have been in every Thursday setlist since 2001. Two somewhat-rare A City by the Light Divided cuts returned to the setlist: single “Counting 5-4-3-2-1” returned for the first time since this spring’s Taste of Chaos Tour, and the atmospheric “Running from the Rain” made its first appearance of the year, though the vocals were unfortunately mixed too low to make out Rickly’s haunting words. A fairly lengthy thank you to Epitaph Records preceded the band’s first single on that label, “Resuscitation of a Dead Man”, which comes off much more fiery in a live environment. 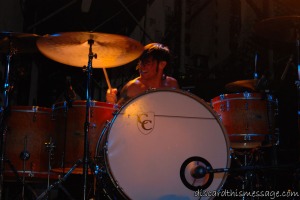 Dedicating the next song to “Snookie” and “The Situation” in his best impersonation of MTV’s Jersey Shore, Thursday kicked into the incendiary “At This Velocity”. Lead by Andrew Everding on keys, “Circuits of Fever” briefly calmed the crowd with its electronic introduction before Rickly unleashed impassioned vocal assaults, once again revitalizing the crowd’s energy. The song pushed drummer Tucker Rule to his limits as he gasped for air following the song’s pounding conclusion. 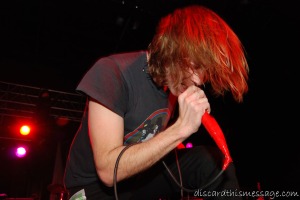 Long removed from the band’s standard bill of fare, “Standing on the Edge of Summer” was a nice surprise addition to the setlist. Rickly commented that although it’s cold (correction, Geoff, it was freezing) outside, the band would play the song as a way of celebrating time spent together even in less-than-desirable situations. “Cross Out the Eyes” was dedicated to Boysetsfire (Nathan Gray of The Casting Out’s previous band) as the band finished their set. 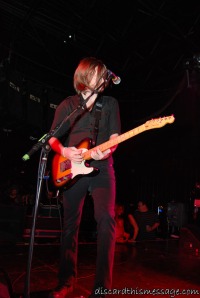 Chants for more songs prompted the band’s reappearance, and Rickly wished everyone a happy New Year as guitarists Steve Pedulla and Tom Keeley ripped into the opening drop-D riffs of “Jet Black New Year”, the night’s final song. The full setlist, which unfortunately cut out four songs (likely due to Rickly feeling under the weather): 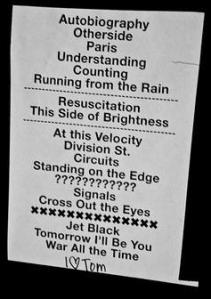 Autobiography of a Nation
Otherside of the Crash/Over and Out (of Control)
Paris in Flames
Understanding in a Car Crash
Counting 5-4-3-2-1
Running From the Rain
Resuscitation of a Dead Man
At this Velocity
Division St.
Circuits of Fever
Standing on the Edge of Summer
Signals Over the Air
Cross Out the Eyes
Jet Black New Year

In keeping with a career-long tradition of selecting only the finest bands as openers — a list that includes acts such as Thrice, Rise Against, Circa Survive, Lifetime, and Coheed and Cambria — Thursday’s support was extremely impressive and would have made for an excellent show even without the veteran headliners at the helm. Tossing the New Brunswick six-piece on top of the lineup, though, ices an already sweet cake and finishes 2009 with possibly the strongest bill of the entire year. Thursday’s plans to tour with Anberlin this spring have been scrapped, so it might be some time before the band hits the stage again; at least they closed the year, and indeed the decade, on one of the strongest notes of their career.

Setlist photos thanks to Brian C. Reilly. All photographs credit to Discard This Message Photography. Please visit their website for more amazing photos from the evening.